Cannot find one or more components: Please reinstall the application

First day back from the Australia Day public holiday was no fun: 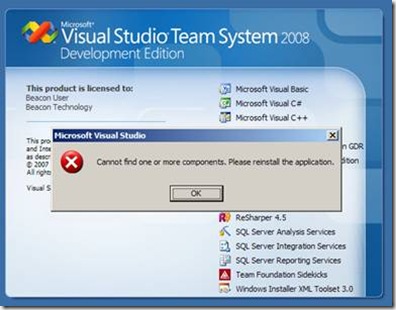 Asking Visual Studio 2008 to ‘repair’ itself didn’t work (it actually came up with the error a few times during the repair), and neither did a complete uninstall-reinstall cycle (which also raised the same error a few times). :-(

A bit of Googling around determined that others had had this error ‘cannot find one or more components’ error, and it seemed to normally track back to a missing ATL90.dll. And that’s exactly what ProcessMonitor told me too, though for a different version of the dll. This folder was empty:

The version number in that path, ATL90.dll 9.0.30729.4148, is the version number of a hotfix patch to the Visual C++ 2008 SP1 redistributable. Which isn’t applicable if you have Visual Studio 2008 installed, so god only knows how it got installed in the first place, but now it wasn’t, only Windows still thought it was, and no amount of Visual Studio 2008 / SP1 reinstalling was going to change its mind. Nor was there a hotfix entry in Add / Remove programs to get rid of it.

Eventually I gave up, uninstalled Visual Studio (again), installed the Visual C++ 2008 SP 1 redistributable, and then the ATL security update for that, and hey presto, an ATL90.dll in the right place:

But subsequently uninstalling both of those didn’t then remove this, nor (as far as I could tell) the registry entry pointing to that location:

So I just left it there, installed VS 2008 + SP1 over the top, and now things work, although I am not exactly filled with confidence for the future.

[update: seems to have worked fine since…]

thanks for this man, real life saver

I had no way of knowing that single DLL was somehow missing or how to fix this problem. Finding this was an unexpected life raft in an otherwise hopeless situation doomed to reformat just to get this working again.

For all us random people searching the web for solutions, thank you.

There are several posts saying that the issue is with ATL90.dll.. But none with the steps on how to do it.

Thanks again
Appreciate it.