I’ll ‘fess up to being totally unimpressed with progress in the PC industry in the last 10 years. I appreciate we’ve made some fairly big steps technologically speaking (multi-core is right up there), but the growth of power consumption and (as a result) heat and noise dissipation has had me absolutely appalled. Kilowatt PSUs! Heatsinks the size of a fist! 3D graphics may have come on in leaps and bounds, but does it have to sound like a 747 about to take off? It’s all just so crude. I feel like opening the drive bay and shovelling in more coal.

I constantly think back to the Acorn Risc PC I had in uni, which seemed pretty powerful at the time, but whose CPU ran cool to the touch. It’s been downhill ever since.

Similarly I like to complain about laptop battery lives. What’s the point of a mobile computer if you have to be tied to the wall socket every two hours? But then laptops aren’t actually mobile computers, they are portable computers: portable like a portable TV is portable: you can pick them up and carry them around, but realistically to use them you’ve got to plug them in. This drives me *nuts*, particularly as I can easily burn through two hours before I really get started on anything, by which time it’s time for a battery break.

The wife’s old laptop (one of my cast offs) finally went back to the Dell recycling plant in the sky, and so we got her a netbook as a replacement. A Mini 9 to be exact.

I can’t really say how it compares to it’s other netbook brethren, but if this is what the rest are like then viva the revolution because for on-sofa / in-kitchen[1] / in-bed casual browsing this form factor and weight (1kg) is absolutely on the mark[2]. Not too big, not too small. The Mini is SSD so it’s totally silent (excepting occasional sound card cross-chatter). The Atom CPU runs cool, so it doesn’t make your lap all sweaty. And it’s cheep enough to buy on a whim ($550 currently)[3]. Oh and it’s XP, so it can run .Net.

I don’t totally buy into it as the nirvana of mobile computing, because 3.5 hours is still not enough, but as something you can happily take room to room in the house it’s bang on.

Here it is cosying up to a Dell 15” Latitude: it’s exactly half the size[4] 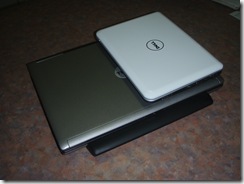 Here it is dwarfed by my 17” Inspiron 9300, which is only it’s grandfather in Laptop-generations: 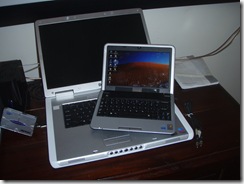 Ok, so the 9300 still beats the pants off it in terms of performance, but the Atom team have seriously lit a fire under the rest of the industry because it’s already good enough for most people, and it’s only going to get better. You’d have to imagine when the average punter catches on that Atom-based desktops, like the the EeeBox, can happily handle their Word/Email/Web demands there’s going to be a fairly major correction in the market, whatever the critics say. Just check out the price differential. That 90% of your horsepower you donate to SETI, Folding@Home or whatever: why not just not buy it in the first place and save your kilowatt hours? And that’s before you even consider any cloud computing offload.

In years to come we will look at our current CPU technologies in the same way we view CRTs, incandescent bulbs and the internal combustion engine. Here’s hoping we are making the first footsteps now.

[1] For recipes. I mean, no-one really bought an internet fridge, right?
[2] Though it would be better as a tablet
[3] Frankly it’s cheep enough to use as a universal remote control, if only all your devices talked Bluetooth
[4] If it looks like its overhanging on the right, it’s just the perspective
Posted by piers7 at 15:59